My study of psychology has developed my understanding of physical and moral development. I have always had an understanding regarding the basics of puberty and maturation; however, analyzing it from a psychological perspective has provided me with a different outlook on the behavioral and emotional aspects.  It is a well-known idea that when people hit puberty, things change.  These changes affect not just one’s body, but emotions as well. Before understanding psychology, I never before associated puberty with the beginning of emotional and behavior issues in oneself.

It is understood that all people develop and mature at different rates, each rate with their own developments and consequences.  Many girls who mature at a young age experience depression, anxiety, and eating disorders. These body-related mental health issues commonly cause these females to cope in unhealthy ways.  These coping methods may include alcohol and drug abuse, unplanned pregnancy, or suicide; all of which can impact success at school and in day to day life. This early maturation in females has also been linked to adults having higher BMI (body mass index) as adults.  Despite the fact girls who hit puberty at a later age are proven to have fewer difficulties, many do worry that their later development can cause feelings of anxiety and lower self-esteem as well. Overall, this means that from a young age girls bodies have a high power not only over their future but their physical and mental health as well. Ideally, it is at this stage in an adolescent’s life they should come together and support each other.  Unfortunately, however, this is most often the stage where cliques form and people become extremely cruel.  Instead of supporting one another, girls begin to talk and compare bodies, creating a destructive and unsupportive atmosphere, which in turn heightens female mental health issues.

The importance of exercise is introduced at a young age as it posses many physical and mental benefits.  Despite this importance, it remains something completely underrated in the school environment. When teachers want to punish a child for behavior, they often take away a child’s recess or physical education class, as “recess is just playtime” or “Phys. Ed isn’t a real class”. As an individual who has studied two years in the kinesiology program in hopes of teaching physical education one day,  I do make statements like this personally. It is recommended that people get 90 minutes of moderate to vigorous activity a day.  Unfortunately, a meager 23% of Canadian children are even reaching this goal and we continue to remove further opportunities they have to be active. Studies have proven that 8-9 year old’s who have a recess for 15 minutes a day or longer, had better class behavior than those who did not. It has also been confirmed that recess/physical activity breaks are extremely important for students with ADHD as well as students in poverty or with a disability. So why do we as educators continue to ignore something that has been proven to be beneficial to students? Last year I revisited the school I graduated from to visit old coaches, and friends. During my visit there I noticed a large difference in the type of environment they were creating. Many classrooms had couches, exercise bikes, tables, and balls, etc. they had made these changes so students could move, be active while doing their work. After talking to the teachers about the new set up and the student’s new amount of freedom. The response I received from teachers, though did differ from class to class, especially when comparing math to English, but was it was overall quite positive. Teachers and students were generally quite happy with this new set up, however, it was expressed that with the new amount of freedom there did have to be well known and active rules. Of course, there were days when students took this freedom too far and did not use it to be productive and actions were taken, however, work was always done and students did enjoy class more.

I spent a lot of time thinking about what I wanted to do with the rest of my life as it is not a decision that anyone should take lightly. I thought once I figured out that I wanted to be a teacher the hard part was over, but I couldn’t have been more wrong. For me, the hard part was choosing what age I wanted to teach, what age in which I wanted to be responsible for their future. I always thought I was going to be a High School Physical Educator and Health teacher. My train of thought was, “I like sports, exercise, kids who I am able to have a relationship: this is perfect”.  It was not until I finished my second year of the joint Kinesiology and Education program, that I knew that wasn’t what I wanted to do with my life. I had focused so much on just wanting to be with an age group who I’d be able to communicate with, talk to and relate to, just like I did with so many of my teachers and coaches. Though I understood I wanted these personal relationships, I  never realized why I wanted this connection. After sitting down and thinking about what I want in my professional life, I realized my career goal was to help people. One of my favorite sayings is, “be the person you needed when you were younger” and since reading that quote, I have begun living my life by it. I can’t decide what I hated most growing up high school or middle school, and it was because of this, and looking back I decided I wanted to teach middle years. Middle school is such a sensitive period in a child’s life and I really feel that teachers can have a huge influence on students’ developmental life in more than an educational way. A connection and relationship can still easily be made with middle years students but it will be less of a friendship/mentors and more like a support system. It’s because of my experience in middle school and wishing I would have had someone to talk to and I intend to be the teacher I wish I would’ve had, not just as an educator but as a person.

Students need to be to cared about to care about school. 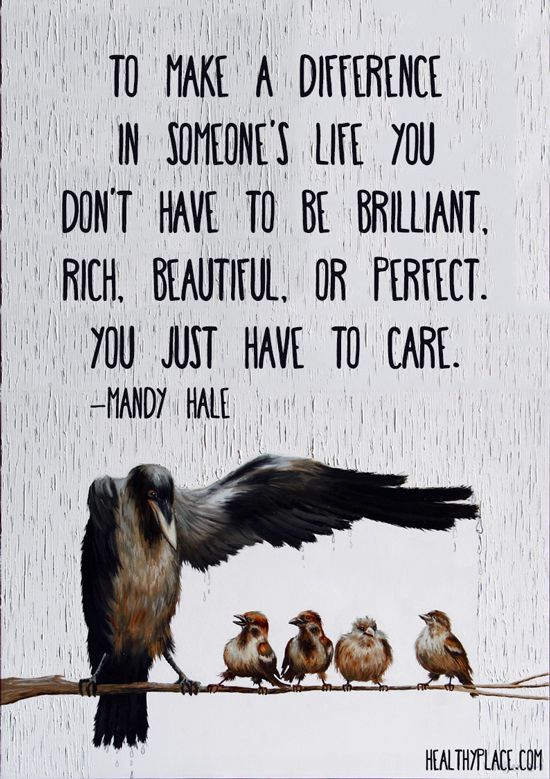